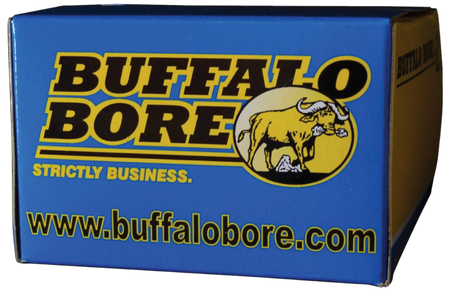 These loads are a direct result of customer requests for such loads. They are full power loads and utilizes a flash suppressed powder, so the shooter will not be blinded by his own gunfire should the hammer be dropped in a low light situation. These heavy loads add more power than ever before to the specified caliber. This ammo is safe to shoot in any all steel revolver or standard pistol. This ammo is no harder on your gun than any other normal ammo. Buffalo Bore doesn't recommend this ammo to be fired in super light alloy revolvers as bullets may jump crimp under recoil, but the ammo itself wont hurt these super light weight revolvers. These revolvers are simply so light that the recoil is severe enough to cause crimp jump.